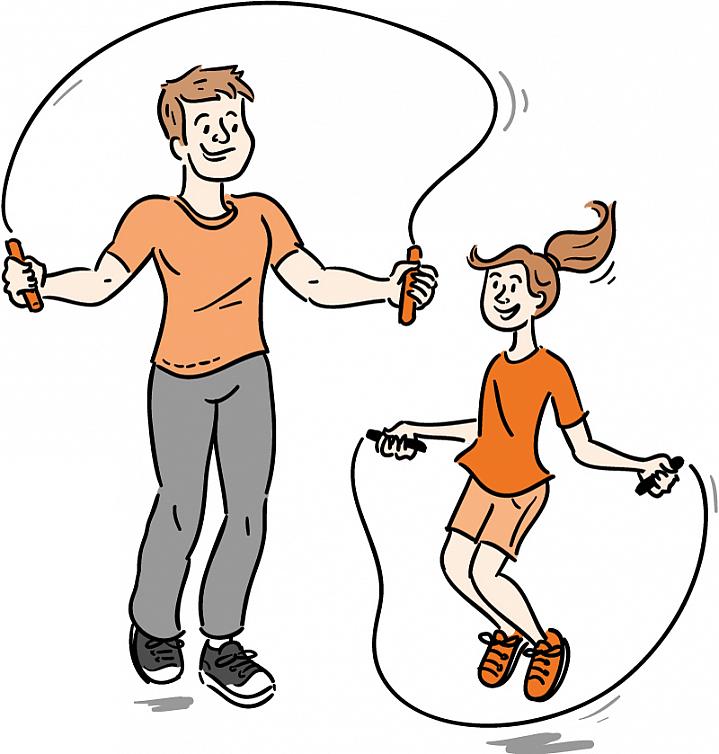 Many things can influence a child, including friends, teachers, and the things they see when they sit in front of the TV or computer. If you’re a parent, know that your everyday behavior plays a big part in shaping your child’s behavior, too. With your help, kids can learn to develop healthy eating and physical activity habits that last throughout their lives.

Healthy eating and physical activity are essential for children of any age. “They can have many health benefits for children, including promoting heart health and improving mood,” says Dr. Voula Osganian, a child obesity specialist at NIH.

Getting active and eating right may also prevent excess weight and childhood obesity, a growing concern in this country. Today, nearly 1 in 3 children in the United States is overweight or obese. “If someone develops obesity as a child or adolescent, there’s a very high likelihood that they’ll remain obese or overweight as an adult,” Osganian explains. “But studies also show that if you start eating healthy and being active early, you tend to maintain those habits over time.”

Although most of us know that it’s a good idea to eat healthy food and move more, it isn’t always easy to do. Children aren’t likely to change their diet and activity habits on their own. It’s up to you to make it easier for your family to make healthy choices.

“Parents are very important in terms of arranging an environment and setting a model for healthy or unhealthy behavior,” says Dr. Leonard H. Epstein, an expert
on childhood obesity at the University of Buffalo. “Parents bring foods into the house. They control how much time a child can watch TV. They control what kinds of social activities are paired with foods. And kids learn a huge amount about eating and physical activity from watching and imitating their parents.”

Epstein’s research shows how important parents can be. In NIH-funded work, his team assigned obese children, ages 8 to 12, to different types of weight loss programs. All the groups were taught about healthy diet, behaviors, and exercise. For some groups, positive feedback and encouragement for weight loss and behavior changes were given only to the child. Other groups focused on both the child and an obese parent. Comparison groups received little feedback.

The researchers found that when obese parents and children worked together, both were more successful at losing weight and making healthy changes. “Our studies suggest that getting the whole family working together really benefits the child,” Epstein says. “Even after 10 years, when these kids were 18 to 22 years old, the ones who had the parent working with them had lost more weight and maintained more weight loss than the ones treated by themselves, and obviously more than the comparison groups.”

Over time, most parents gradually began to regain their lost weight, the researchers found. But after 10 years, more than 40% of the kids who worked with their parents had maintained a weight reduction of at least 20%. “The finding suggests that even if the parents go back to their old behaviors, many of the kids will not,” says Epstein.

While it’s never too late to start making healthy changes in your family, research suggests that the earlier your kids learn healthy behaviors, the better.

Dr. Julie Lumeng, a pediatrician at the University of Michigan, focuses her NIH-funded research on the factors that affect eating behaviors in young children—especially preschoolers and infants. That’s an ideal time to start exposing your children to a variety of healthy foods, such as fruits and vegetables, so they develop a liking for them.

Getting young ones to accept fruits and vegetables can be a challenge, but some parents give up too quickly if a child rejects a new food. Research suggests that the more times you offer a food, the more likely a child will be to warm up to it. “Kids typically have to taste a new food 9 to 15 times to begin to like it,” Lumeng says.

If your child doesn’t like a new food right away, stay positive and keep trying over time. Encouraging kids to take just one bite of a new food can help. But avoid creating conflicts and stress over it.

“Trying a new food can be exciting and also stressful in general,” Lumeng says. “Several studies show that kids are more likely to try a new food if they’re eating in a setting that’s relaxing and pleasant.”

Children under the age of three tend to stop eating on their own when they’re full. “But after age three,” Lumeng says, “the more you put on their plate, the more they’ll eat.” So make sure to give your kids child-size portions.

Take opportunities to teach young children about feelings of fullness. “If your child asks for another helping, instead of saying, ‘No, honey, you’ve had enough,’ try saying something like, ‘You must really be hungry tonight,’ to raise their awareness of their feelings,” Lumeng suggests. “Or when they stop eating, say, ‘Oh, you must feel full now,’ to help teach about hunger and feeling satisfied.”

Several studies show that parents can effectively influence healthy behaviors by talking in a positive way or avoiding certain situations altogether. “Instead of telling your children, ‘No, you can’t have any more cookies,’ just keep cookies out of the house altogether,” says Lumeng.

When you bring unhealthy food and sugary drinks into the house, “parents essentially become the food police,” adds Epstein. “It’s easier to create an environment in the home where there’s limited access to unhealthy foods and lots of access to healthy foods.”

Experts recommend that most kids get at least an hour of moderate to vigorous physical activity each day. Parents can help by limiting TV and computer time to no more than one or two hours per day.

“Small changes in the home environment can also have a huge effect on physical activity,” says Epstein. You can make sports equipment like balls and jump ropes more accessible by putting them next to the door. Walking fast, bicycling, jumping rope, and playing basketball, soccer, or hopscotch are all good ways for kids to be active.

When it comes to food and physical activity, what you say and do around your children can have a lasting effect. Work together as a family to make healthy habits easy and fun.